The intention of either solution

NSX product suite, whether T or V, is meant to provide a software-defined network fabric for which virtual machines, containers, and bare metal assets can consume. NSX offers the ability to instantiate tangible network services such as load balancing, NAT, VPN, extended layer 2 networks via overlays, distributed firewalling for micro-segmentation, and IPAM all through software. This gives operators the agility needed to provision resources on a per-application basis without having to re-architect their environment by adding hardware into the data plane. NSX affords engineers the abstraction from their physical network infrastructure to simplify the underlay network while still providing complex solutions over the top. NSX also provides a means for deeper integration into the virtual machine or container environment.  This creates objects directly in the kernel of the hypervisor or deploys container network interface compliant pods (specific to NSX-T) that translate more granular control over traffic flows.  Traffic flows like service chaining and visibility translate into flow patterns. Overall, NSX (both T or V) provides a suite of tools to easily operate a network utilizing a common set of tools that are defined by software, quick to change, and effective in their implementation.

If either solution provides all the tangible benefits, why chose one over the other? For context, NSX for vSphere, or NSX-V, was around first. It was meant as a solution that directly integrated into vSphere through vCenter connections. NSX-V was meant for a vSphere-centric world when the idea of ‘hybrid cloud’ or agnostic vendor selection was less of a priority. Due to that mindset, NSX-V was limited in its capabilities for expansion outside of vSphere. New environments required a level of flexibility that NSX-V could not provide. Next came NSX Data Center, or NSX-T. Built from the ground-up, NSX-T provides the same overarching benefits of NSX-V as described above but adds flexibility in what and how it manages systems. Rather than relying on proprietary VIBs installed directly in the ESXi kernel, or utilization of the virtual distributed switch, NSX-T takes on constructs of abstraction by creating new objects and managing more openly distributed tools. Tools like Open vSwitch and the like. This means NSX-T can manage objects outside and totally independent of vSphere. NSX-T can manage KVM hosts, containers, vSphere, and cloud objects all at the same time. Here is a list of direct benefits of NSX-T over NSX-V (this is not a comprehensive list).

Most importantly NSX-T has VMware’s engineering focus. This is made apparent in VMware Cloud Foundation’s 4.0 release and subsequent VMware Validated Designs (VVDs) where NSX-V is removed even from the management cluster (or management workload domain for VCF). In the end, NSX-T provides numerous benefits over NSX-V mostly spawning from its independence from vSphere as a solution and its modular approach.

Generally, there are two types of migration from NSX-V to NSX-T. Each is held accountable to the requirements above. In either case, the overall goal is to build an NSX-T environment ‘somewhere’ and use the built-in migration coordinator to import NSX-V configurations, to finally migrate data plane objects. 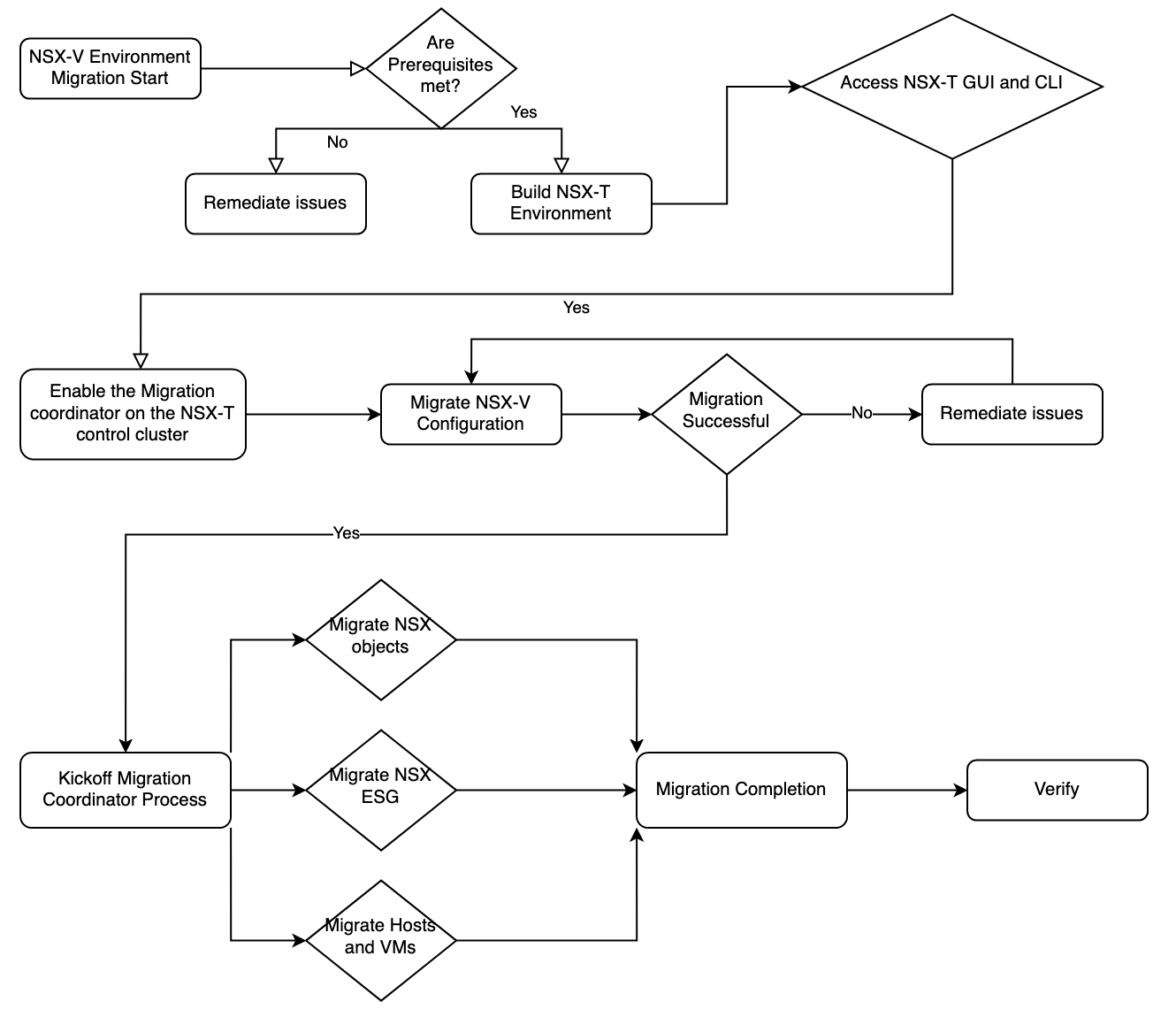 Now that we have set the scene and gone over the benefits and longevity of NSX-T, we need to start considering migration steps away from NSX-V.

Refer to the resources for version-specific instructions or commands.

Overall, there are several guides and resources walking step-by-step through the process but, are typically version-specific. Here we discussed not only the general process flow and prerequisites but more importantly, some reasons why migration is necessary in the first place.