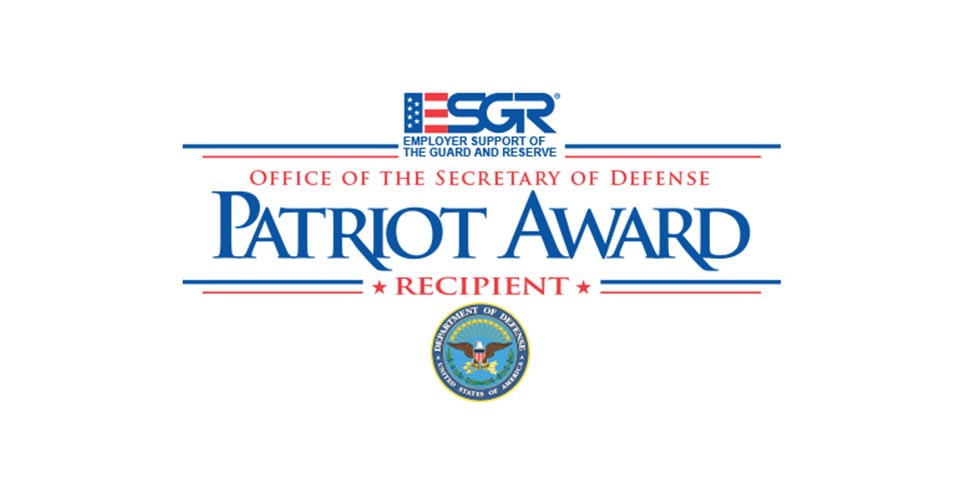 Two Sterling executives have been nominated for the Patriot Award in recognition of their exemplary support of an employee in the National Guard and Army Reserve.

Brad Moore, President and CEO, and Stan Lupkes, VP of Services, were honored with the distinction by the South Dakota chapter of the Employer Support of the Guard and Reserve (ESGR) organization. As a program within the Department of Defense, ESGR advocates for ongoing cooperation between Reserve Component Service (RCS) members and their civilian employers, working to resolve conflicts and promote understanding.

The Patriot Award is the first in a series founded to recognize employers who go above and beyond for the RCS members in their employ. Moore and Lupkes were nominated by Ted Jackson, a South Dakota National Guardsman and a Senior Systems Engineer.

Facing a prolonged deployment just three months after his start date, Jackson found comfort in knowing the job would be waiting for him upon his return. “For an employer to be willing to hire a Guardsman who would then be gone for the next nine to twelve months…it was impressive. Brad and Stan took a chance on me, and their dedication to the Sterling staff, the South Dakota Army National Guard, and the Military as whole has been nothing short of outstanding.”

As Jackson’s direct supervisor, Lupkes says Jackson has proven to be an invaluable member of the Sterling team. “Ted epitomizes what we look for in an employee,” reflects Lupkes. “He brings professionalism, discipline, and genuine leadership to the role-all skills gained from his time in the military. We’re proud to have him aboard.”

Jackson first joined the SD Army National Guard in October 2007. Since then, he’s served on a number of different units and was deployed to Afghanistan in 2013 and then, three years later, to Kuwait. He has worked for Sterling since 2015.

To learn more about the Employer Support of the Guard and Reserve organization, visit www.esgr.org.

Sterling is an award-winning technology solutions provider with over 22 years of experience helping customers solve the most complex requirements of their IT environments. Sterling provides customers with a simplified IT experience by being their single point of contact for all their solutions architecture, proof of concept, product fulfillment, and technology adoption needs. Additionally, they provide cybersecurity solutions for mission critical clouds and networks, helping turn every What If into reality.

Previous Post Sterling Computers Named to 2018 CRN Fast Growth 150 List
Next Post Sterling Earns Seventh Inc. 5000 Appearance
We use cookies to ensure that we give you the best experience on our website. If you continue to use this site we will assume that you are happy with it.Ok